Will the NFL’s Insurers Obtain the Discovery that Evaded Players in their Litigation? 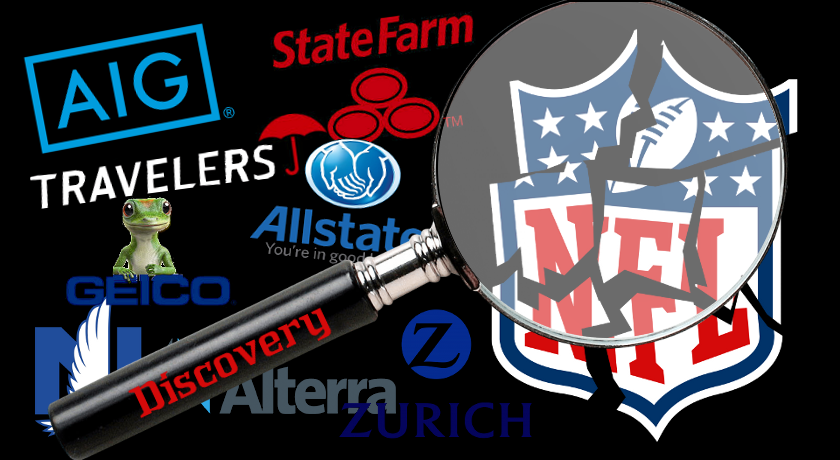 “League of Denial” took center stage at a hearing last Friday between the NFL and its insurers, according to Daniel Kaplan of The Athletic. Richard Pratt, one of the attorneys representing the insurers gripped a copy of the groundbreaking 2013 book and placed it on the insurers’ table during the 75-minute hearing in which the insurance companies argued to obtain the discovery the NFL has evaded for seven years.

Kaplan wrote that the presence of the book, in clear view of the justice, almost projected its own message to the NFL’s attorneys who agreed to a billion dollar plus settlement with brain-damaged retired players without consultation with or collaboration with the insurers the league hopes to stick with the bill.

“One of the central issues in the (concussion case) stems from allegations that the NFL Parties conspired with various entities to conceal allegedly known long-term health risks associated with head impacts sustained during NFL play,” the insurers wrote in a recent motion. “Faced with these damning allegations, the NFL Parties entered into a settlement…without producing or receiving a single page of discovery or conducting a single deposition.”

Not only have the insurers been critical of the NFL’s evasion of discovery, but many retired players were sorely disappointed that the League of Denial, managed to slide through the settlement negotiation process virtually unscathed and unembarrassed by the documents and testimony that would have been procured through discovery, not to mention leverage against the NFL in achieving a much broader settlement than the deal that was inked.  The settlement completely glossed over the original purpose of the early lawsuits—that of holding the National Football League accountable for CTE—only compensating the families of players who died and were diagnosed during a very brief time span—and does nothing to compensate the most common symptoms of the disease.  With over $664 million in approved claims, only two-years in, which has only compensated some of the most severely impaired players that managed to jump through all the legalistic hoops, the NFL continues to ferociously attack dementia claims with the viciousness of a pack of hungry hyenas encircling a wounded lion in order to limit their losses.  The insurers want no part of it.

Friday’s oral arguments were held before Justice Andrea Masley in which a contingent of lawyers representing 28 insurers protested the NFL’s continued efforts to stall discovery.

“There simply was no discovery done before that settlement,” said Heather Simpson, counsel for the insurers. The only thing the insurers have received is “here’s everything that was on PACER,” she said, arguing that they are being asked to litigate based solely on publicly available documents, Frank G. Runyeon of Law360 reported.  “There is no underlying discovery we can go to,” she argued as the insurers made their case for the court to compel disclosure of the underlying litigation and settlement materials.

As Kaplan explained, “Generally an insurance contract contains provisions that invalidate coverage if the insured knows of the dangers that caused the damage. So if for some reason I purposefully drive a car into a tree, the insurance company would not cover because I had to know such action would cause the front of the vehicle to crumple.  And so the insurers allege the NFL knew in essence players would crumple. But what the insurers, up to 30 of them, need is evidence. In other words they need discovery, depositions. And that’s where last week’s hearing came in.”

Having grown weary of waiting for the NFL, 18 months ago, the insurers subpoenaed the 32 NFL Franchise Clubs in order to obtain information.  “We’ve been dealing with this for years — delay, delay, delay,” said Christopher Carroll, another lawyer representing the insurers, arguing the judge should allow it to proceed with the 32 subpoenas served on NFL teams in 22 states, seeking to find out what they knew about the alleged link between players’ head trauma and brain injury, according to Law360, but as Kaplan explained, “Not much happened until April, when the insurers then began filing actions in states courts seeking to enforce the subpoenas. The NFL reacted stridently in court papers, and secured a temporary stay from the New York State Supreme Court on these legal actions.”

Seth Schafler of Proskauer Rose, one of the attorneys representing the 32 NFL teams said at the hearing that three million documents had been searched and 14,000 turned over to the insurers, but Kaplan reported that the lead attorney for the insurers, Christopher Carroll, informed the court that the NFL had “games in play.”  He stated that whenever emails are sent to the insurers, the teams copy the NFL’s in-house counsel.  “[I]f you don’t think that this is an NFL-driven discussion, and it absolutely is part of this delay process that we’ve been dealing with for seven years.”  The insurers believe the NFL is cherry picking the information being released, providing only what is favorable to them and concealing or withholding the rest.

True to form the NFL is going scorched earth against the insurers and apparently making headway with Justice Masley in their arguments.  “You have a really tough situation. Why shouldn’t I manage my own case?” Justice Masley said to the insurers, picking up on the NFL’s arguments that allowing the subpoenas to proceed in the various jurisdictions where the teams are located would effectively allow a bevy of other judges to opine on her case.

Prior to Justice Masley’s assignment, the insurers’ litigation was handled by Justice Jeffrey K Oing, who, in an order dated November 1, 2016, detailed the repeated discovery delays and indicated the time had come to start producing.

In his order, he reviewed the procedural history of the case, which began in August 2012.  On March 15, 2013, Justice Oing denied the NFL’s motion to dismiss but stayed the case pending the resolution of the concussion litigation with the players in MDL 2323.  “The NFL entities successfully prevailed in convincing me to adjourn the matter to November 16, 2015, which happened to be the date after the class settlement was finalized,” wrote Justice Oing.

At the November 16, 2015 status conference, the insurers sought to move forward with discovery, to which the NFL objected. Justice Oing decided to confer with Judge Brody in the Eastern District of Pennsylvania who recommended delaying, therefore he adjourned the matter twice to April 29, 2016, at which time a status conference was held.

In the order, Justice Oing cited from the transcript of the hearing, capsizing the NFL’s arguments against document production.

This argument is no longer valid as all but three opt-out claims have now been settled, but beginning in 2016, other lawsuits against the NFL were filed, the first of which by the survivors of Adrian Robinson Jr.  The new cases, including Robinson’s, were also consolidated to MDL 2323, and the Robinson case is now seeking its own discovery and or remand to state court.  It seems the NFL’s arguments are wearing thin, but nevertheless, the league is relentless in its resistance to produce.

After Justice Oing was promoted to First Appellate Division and the case was reassigned to Justice Masley, most observers believed that after a period of getting up to speed on the case she’d pick up where Justice Oing left off, but in viewing the discovery schedule Oing ordered, it’s apparent the NFL has once again been successful in evading those who want to know what the league knew about brain injuries. 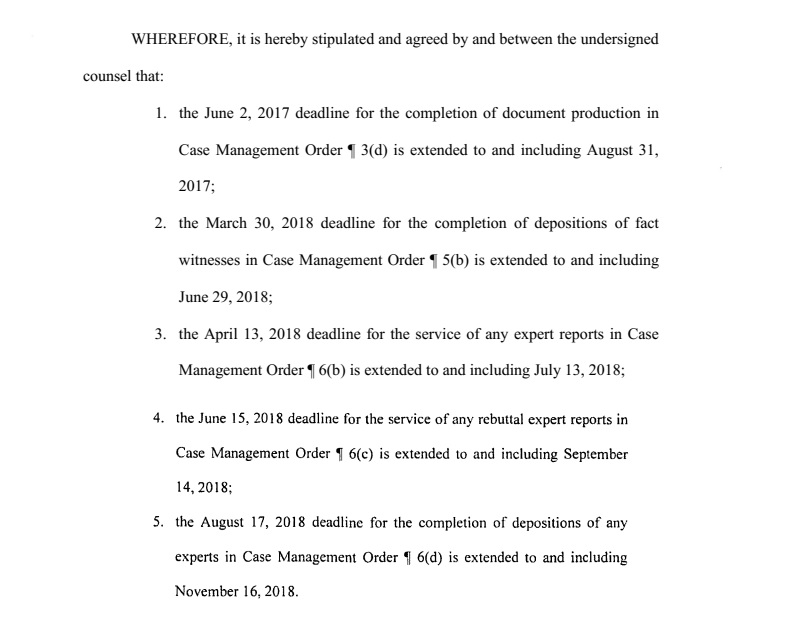 Discovery schedule set by Justice Jeffrey Oing that was abandoned when he was promoted to First Appellate division and Justice Masley was assigned to the case.

As you can see, based on Justice Oing’s timeline document production should have been completed in June 2017, with depositions concluded by November of last year.  Since it appears no meaningful document production has taken place halfway through 2019, the NFL has successfully stalled and delayed at least full two additional years as evidenced in Justice Masley’s Case Management Order dated May 26, 2017, and likely longer based on the insurers’ assertions of the NFL’s reluctance to release documents. 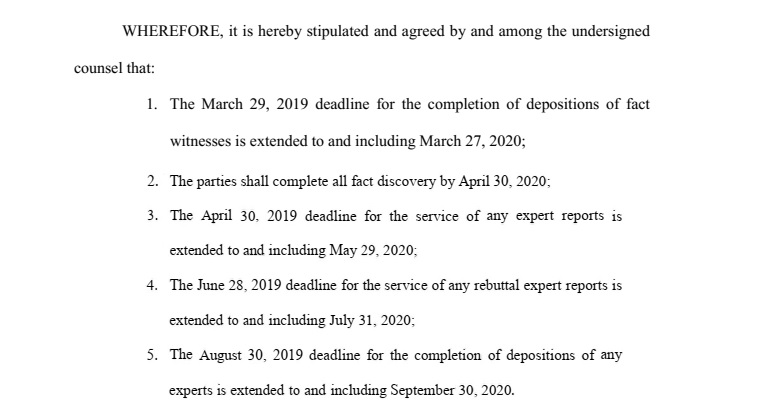 Justice Masley’s case management order represents the current discovery schedule, but insurers assert the NFL has not been compliant.

As evidenced at the hearing and through various filings by the insurers and the NFL, many disputes as to what must be produced still remain.  The court-appointed referee, Michael Dollinger has made several stipulations that can be found in an 82-page February 2019 order.  The insurers are seeking among other things, the historical records that indicate the league’s knowledge and understanding of brain injury dating back to the 1950s and attorney work product that reveals the decision-making processes that convinced the NFL to settle with the players. 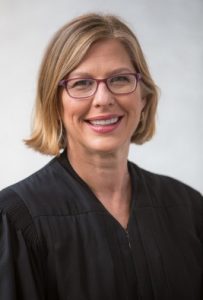 Justice Masley must now rule as to whether the insurers can pursue the teams in various jurisdictions or if she will grant the NFL’s request to consolidate.  Based on the Law360 report, it would appear that she’s inclined to deny the insurers and grant consolidation.

The most important aspect for the public, however, is how far the discovery will go and how much will be disclosed publicly.  Both the NFL and insurers have an interest in keeping a lid on things, but hopefully, as the case plods along, the discovery the players never received will be obtained by the insurers and at least some of it will find its way to the public.

Permanent link to this article: https://advocacyforfairnessinsports.org/nfl-concussion-settlement/will-the-nfls-insurers-obtain-the-discovery-that-evaded-players-in-their-litigation/