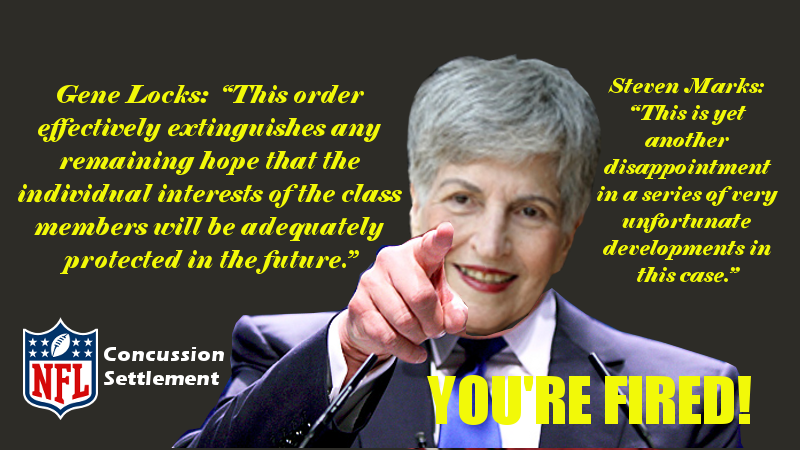 On Friday, Judge Anita Brody, in a very “Trumpian” move, as one attorney described it, issued an order firing all class counsel not named Christopher Seeger.

Brody states that the reason for her order is to conserve the common benefit fund, but this is little more than a disingenuous smokescreen.  While the common benefit does need to be used conservatively, with only $13 million of $112.5 million to pay class counsel fees for the 65-year term only two years out, Seeger has already received the lion’s share–more than all other attorneys involved combined–and no class counsel receive any fees without her express approval.  In order for any member of class counsel to collect from the common benefit, work must first be assigned by either Seeger or Brody.  Afterward, the attorney seeking compensation would submit his request to Seeger who would, in turn, choose to submit or omit if from his fee petition.  Finally, upon receipt of the fee petition, no money is distributed except by order of Judge Brody, herself, therefore it was completely unnecessary to remove these attorneys from the positions they’ve held since 2012. The only thing her order accomplishes is extinguishing their ability to advocate on behalf of the class of retired NFL players as opposed to their own clients on an individual basis.

Instead, the consensus among player attorneys that I was able to reach is that the dismissal is in retaliation for opposing her order imposing new MAF rules that fundamentally change the settlement, and an attempt to silence anyone who might advocate on behalf of the players.

Ryan Boysen of Law360 was first to report in an article entitled, “Seeger Stands Alone: 5 Firms Tossed from NFL Settlement,” that accurately describes the state of the NFL Concussion Settlement following her order, which appears to be the climax to a very tumultuous month.  Here are a few excerpts including comments from some of the attorneys:

In a move that came as a surprise and left many attorneys furious, the federal judge overseeing the NFL’s landmark concussion settlement terminated all of the deal’s leading lawyers except Chris Seeger on Friday, heightening long-simmering tensions between Seeger and his fellow attorneys and plunging the contentious case into uncharted waters.

The order reduces the number of powerful class counsel from six firms to just one, Seeger Weiss LLP, which has always exercised the most influence over the deal.

Gene Locks of Locks Law Firm told Law360 he was completely blindsided by the order.

“The court has consistently refused to allow anyone other than Mr. Seeger and his firm to participate on behalf of the class, and the stated justification, the need to preserve the common benefit fund, is disingenuous because virtually all of those fees have already been paid to Mr. Seeger despite the fact that he represents very few clients” Locks said. “This order effectively extinguishes any remaining hope that the individual interests of the class members will be adequately protected in the future.”

Law360 spoke to six attorneys involved in the settlement for this story. All six said they’d never seen an order like Friday’s before, and four of them said they hoped it would lead to an appeal to the Third Circuit.

“The order came as a complete surprise,” Marks said. “There was no notice to class counsel, who have spent so much time, money and energy on trying to make this settlement effective and meaningful for all of the many clients they represent.”

“This is yet another disappointment in a series of very unfortunate developments in this case,” he added.

My follow-up with other attorneys who spoke under condition of anonymity echos the sentiments of those quoted in Law360, with three primary takeaways; the first being that her actions are “incredible and unprecedented.”  Second to that was that suspicions regarding Chris Seeger’s coziness with the NFL now seem confirmed.  As one attorney put it, “There’s no doubt, now that he did a deal with the devil.”

One attorney said he noticed a change in Seeger over the last six months or so, noting that in prior years, Seeger defended his role as a player advocate [to lawyers], even though many attorneys and players had their doubts.   “Chris Seeger no longer puts up the pretext that he’s working on behalf of the players,” he said.  One attorney said that he now has “zero credibility.”

The third major takeaway is that Judge Brody is no longer making a pretense of any consideration of player concerns.  As I noted in NFL Concussion Settlement No Longer Pretends to Care for Players written after I attended a May 7 hearing at which the now-dismissed class counsel argued against the NFL friendly rules Judge Brody recently imposed, she seemed overtly hostile and at times rude to Gene Locks and David Langfitt as they tried to present their arguments.  One attorney said, “Although she’s an intelligent jurist, it would be hard to come to any conclusion other than she has an agenda of some sort.”

Another attorney wasn’t quite as tactful, “Her focus for the last 28 months has been keeping any true advocate for the players out of her courtroom.” He noted that from the time settlement implementation began in March 2017, she has not issued a single player-friendly ruling, nor has she allowed any attorney not named Seeger to argue on behalf of players in her courtroom until the May 7 hearing.  “It must have been too much for her,” he said, “She couldn’t take it and just fired them all so she’d never have to hear from them again.”  One attorney described her recent rule adoption and the firing of class counsel as “complete disdain for players.”

One attorney said it was “shocking” that no one from the NFL spoke at the recent hearing, but he then noted, they didn’t have to.  “Judge Brody did their work for them,” he said.

After the unprecedented termination of class counsel, which one attorney described as “insane,” I went back through some of my early files from the time prior to the final settlement agreement.  In correspondence submitted to and reviewed by Advocacy for Fairness in Sports, Seeger claimed that Judge Brody seemed unconvinced that any but the most incapacitated players should be paid, even questioning payouts for those with Parkinson’s disease.  Seeger seemed to indicate that players were “lucky” dementia was even covered.

At the time, I figured it was an excuse that Seeger was putting forth to justify a deeply flawed settlement.  In retrospect, perhaps he was being truthful in that statement.  Several unrelated journalists who covered the early days of settlement negotiations up through final approval indicated that it was “common knowledge” that Judge Brody wanted to be remembered “as the Judge that saved the NFL.” It seems the early warning signs were there but tended to be dismissed as we like to believe that federal judges are fair and impartial. Transferee judges who preside over multidistrict litigation are endowed with an enormous amount of power that impacts thousands of individual plaintiffs.

Many others have expounded on that thought, including mathematician, biologist, and historian of science, Jacob Bronowski, who said, “No science is immune to the infection of politics and the corruption of power.”  I find it beyond frightening to see that power abused in the judiciary.  Judge Brody was appointed to the district court by President George H.W. Bush, who said in his inaugural speech, “We as a people have such a purpose today. It is to make kinder the face of the nation and gentler the face of the world.”  Instead of following that lead, she seems to have adopted the style of President Donald Trump who seems to think nothing of insulting those he perceives to be his personal enemies and removing them from positions of authority.  It seems Judge Brody has now done just that.

Seeger is immensely popular with judges who preside over consolidated mass-tort cases and has a history of striking numerous bargains with defendants which often lead to disastrous results for plaintiffs.  Many examples of this are cited in University of Georgia Professor of Law Elizabeth Chamblee Burch’s newly released book, Mass Tort Deals: Backroom Bargaining in Multidistrict Litigation.  I elaborated on a few examples in a recent article.

An attorney I spoke with said, “The new rules, adopted April 11, if allowed to stand, will leave thousands of injured men without compensation, just as the NFL intended.”  As with the attorneys interviewed for the Law360 article, those I spoke with indicated that they hope the orders will be appealed to the Third Circuit and reversed.  If this doesn’t happen, as the players I spoke with indicated time and again, the settlement has become a repeat of the NFL disability plan in which few players are ever approved without appealing to federal court.  In the settlement, they are already in federal court with no appeal rights higher than Judge Brody.  I shudder to consider the consequences.

Permanent link to this article: https://advocacyforfairnessinsports.org/nfl-concussion-settlement/youre-fired/