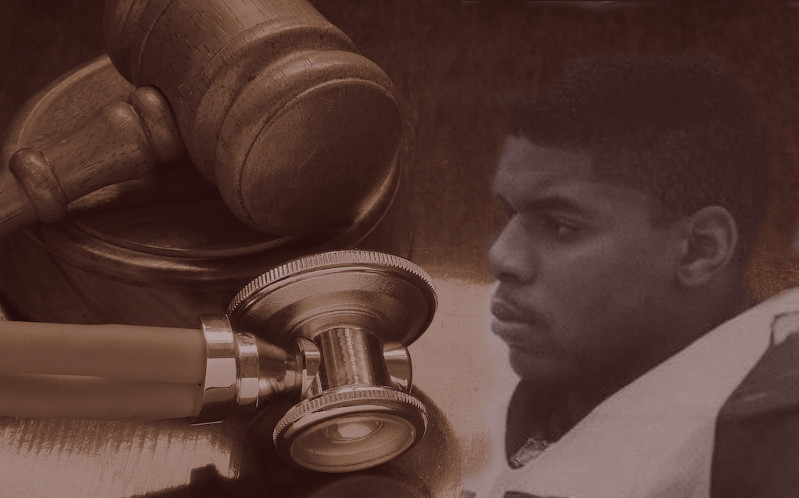 In a January 2017,  interview with Face The Nation, NFLPA Executive Director DeMaurice Smith stated, “The injury rate in the National Football League is 100 percent.” He pointed out, that when players retire, they all have pre-existing conditions, which would prevent most – if not all – of them from getting private health insurance.”  These comments were made in opposition to a repeal of the Affordable Care Act.  Despite this, the NFL and PA only provide insurance for five years into retirement.  After that, players are on their own

Many of the preexisting conditions NFL players retire with quickly spiral into disabilities which preclude them from working, but the NFL’s collectively bargained Disability Plan – which on paper is one of the best among major sports leagues – is extremely difficult to qualify for, especially in the areas of football degenerative benefits or total and permanent disability.  It often takes years for a claim to prevail; just ask Darryl Ashmore, an eleven-year NFL veteran whose claim was finally approved – not by the Plan, but by court of law, after years of red-tape, deceit, and scorched earth litigation from Groom Law Group, who represents the Plan.

Ashmore initially applied for disability benefits on September 26, 2015. I began following his case over a year later, in October 2016, shortly after he appealed his denial to the Court.

In short, Ashmore suffers from early onset dementia as well as frequent and severe migraines, encephalopathy, memory loss, depression, anxiety, impaired concentration, nausea, hypertension, chronic pain in his neck, knees, back, wrist, and shoulders, herniated discs, and degenerative arthritis – and Ashmore – now 48 years old has been in a decline for several years.  He is unable to drive and cannot sit for more than a short while without experiencing severe pain.  This prevents him from flying as well, but despite ample medical evidence to support his condition, the disability board scheduled three appointments for him to see Plan-approved doctors that would have entailed over 1,400 miles of travel.  Attorney Eddie Dabdoub, who represents Ashmore informed the Plan that Ashmore was agreeable to examinations by Plan physicians but because of his limitations, the exams would need to be scheduled with doctors in his home state of Florida and as close to his home as possible. 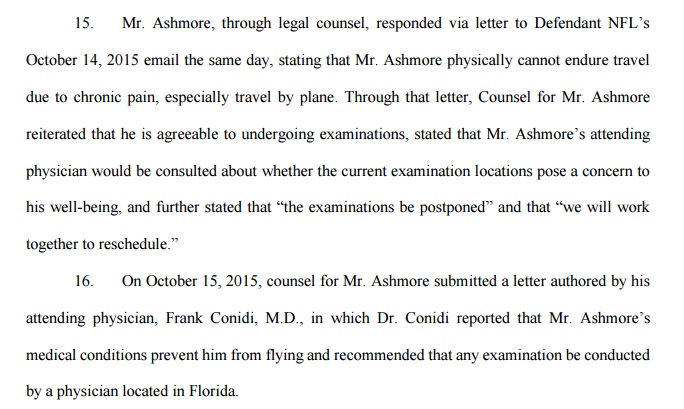 The Plan responded by rescheduling all of Ashmore’s exams in Atlanta, Georgia, which would require a minimum 9-hour ride from his home in South Florida, or air travel which for a 6’7″, 300 lb. man in his condition, is impossible.  On the same day these exams were scheduled, Mr. Dabdoub again informed the Plan that this was still more than Ashmore could handle, requesting reasonable accommodations for his disability.  Staff at the Plan office seemed amenable to accommodating Ashmore until suddenly, his claim was denied because he failed to show for the Atlanta appointment.

The sole reason for his denial was that he had failed to keep an appointment he’d been led to believe was being rescheduled.  There was no review of his medical records, even though his application was supported by records from two orthopedic surgeons, a psychotherapist, three neurologists,  and two internists; thus, his denial was not based on his condition or a lack of documentation, but on a technicality that for all practical purposes Ashmore was set up to fail.

I followed the litigation as it progressed for the next year and a half through discovery and multiple briefs.

Not surprisingly, the NFL used a blame-the-victim-styled strategy in which they attempted to paint Ashmore as an uncooperative troublemaker with only himself to blame for the denial, as is easy to derive simply from reading the outline of contents for their motion for summary judgment.

Note the aggressive tone of the brief, and the play on words, as Ashmore’s request for accommodation was contorted as a refusal to attend exams that he was led to believe were being rescheduled.

Fortunately for Ashmore, his attorney, Mr. Dabdoub kept immaculate records of the ongoing exchanges between himself and Plan administrators.

In addition to Dabdoub’s records, emails uncovered through discovery painted a very different picture than the one the NFL wished to impose on the Court; most damaging perhaps was a chain of emails between Elise Richard, Benefit Coordinator for the Plan Office and the Plan doctors on October 28, 2015 between 9:10 and 9:13 am, cancelling all of Ashmore’s appointments, and then later that day, an email to Ashmore assuring him that she would present his request for accommodation to the Committee.

No other communication took place until Ashmore was blindsided six-days later with a denial because he failed to attend the appointments Ms. Richard had cancelled six-days prior.

Ashmore appealed the denial, including all correspondence with the plan office and extensive medical documentation: 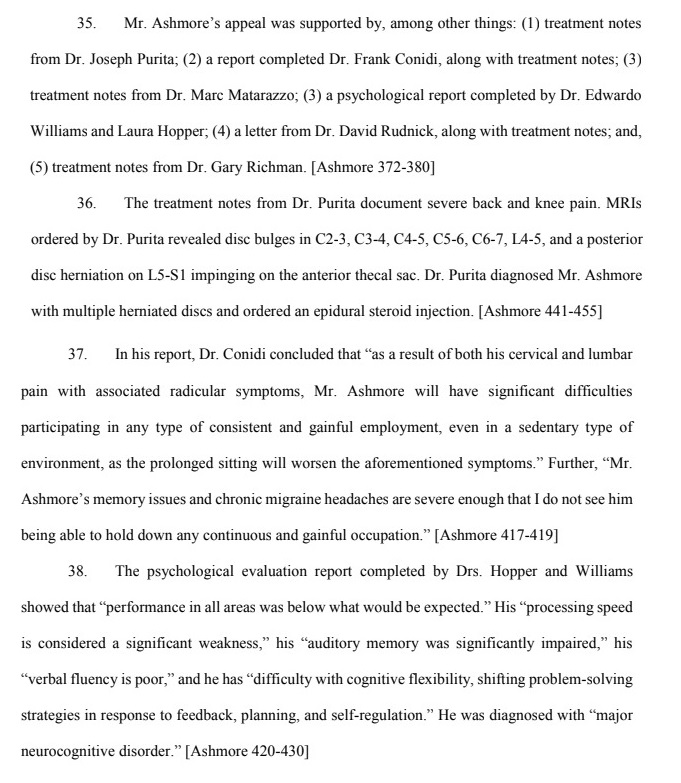 The excerpt above represents just a sample of the medical evidence presented by Ashmore.  Additional records consisted of the results of multiple MRIs of his knees and spine, an Independent Neurological Evaluation, an MRI of the brain with DTI which revealed decreased white matter consistent with traumatic brain injury, an updated neuropsychological report, and sworn affidavits from his wife and a friend attesting to his decline, as well as a comprehensive rehabilitation evaluation.

Again, he was denied on no basis outside his failure to cancel or attend the appointments that he was assured were being rescheduled and had in fact been cancelled by the Disability Board.

It appears that there is nothing Mr. Ashmore could have done to present a favorable case to the Disability Committee.  As with many other decisions involving the NFL, discovery revealed that an apparently predetermined conclusion had already been reached.

Just to reiterate – Ashmore’s appointments were cancelled 5 days prior to the Committee meeting.  The Committee meeting took place 4 days before the scheduled exams, and Ashmore was denied based on examinations that were (a) cancelled, and (b) in the future and not the past.

From the initial claim through denial and appeal, the Board acted with apparent bias against Ashmore, seemingly determined to deny his claim for total and permanent disability benefits. 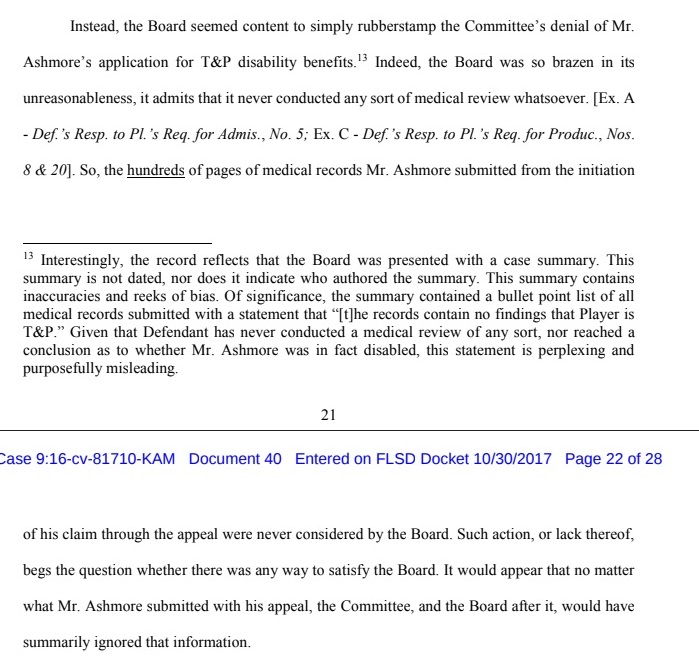 Apparently not content to concede that accommodation was indeed reasonable, in a response brief, the NFL claimed that providing accommodations for “Players like Ashmore,” is “incompatible with the orderly and efficient administration of the Plan,” to which Mr. Ashmore’s attorney replied: 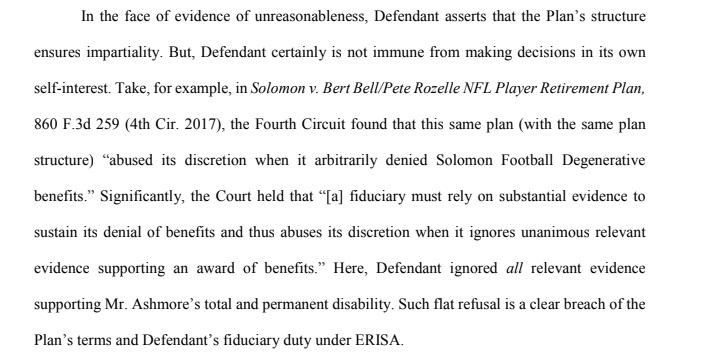 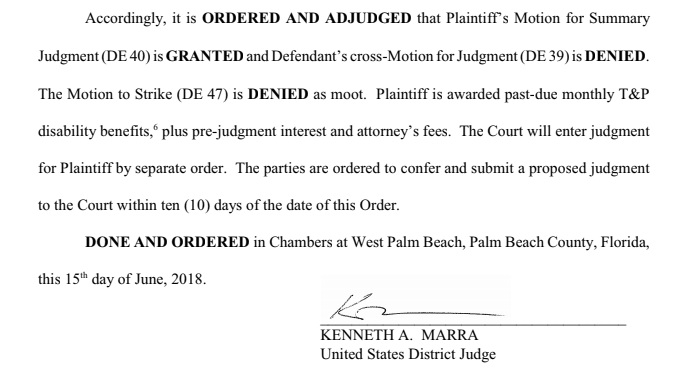 In his opinion, Judge Marra wrote:

Because no reasonable basis exists for the decision, the Court concludes that the Board’s denial of benefits to Plaintiff was arbitrary and capricious.”

I called attorney Eddie Dabdoub for comment shortly after the award was issued, and asked him, since he deals with ERISA disability cases on many levels, if he’d ever had to deal with a defendant as difficult as the NFL.  His answer was, “No. The NFL clearly has a strategy of, ‘we don’t surrender, we don’t negotiate. If you sue us, be prepared to go to the very bitter end and we’re gonna make your life miserable while we’re doing it.’”

At least for Ashmore, after a long, winding and bitter road, there is finally closure and an award of benefits that will provide for his increasing medical expense and his family’s security.

Permanent link to this article: https://advocacyforfairnessinsports.org/nfl-disability/ashmore/ashmore-case-reflects-difficulty-disabled-nfl-retirees-endure-to-receive-benefits/