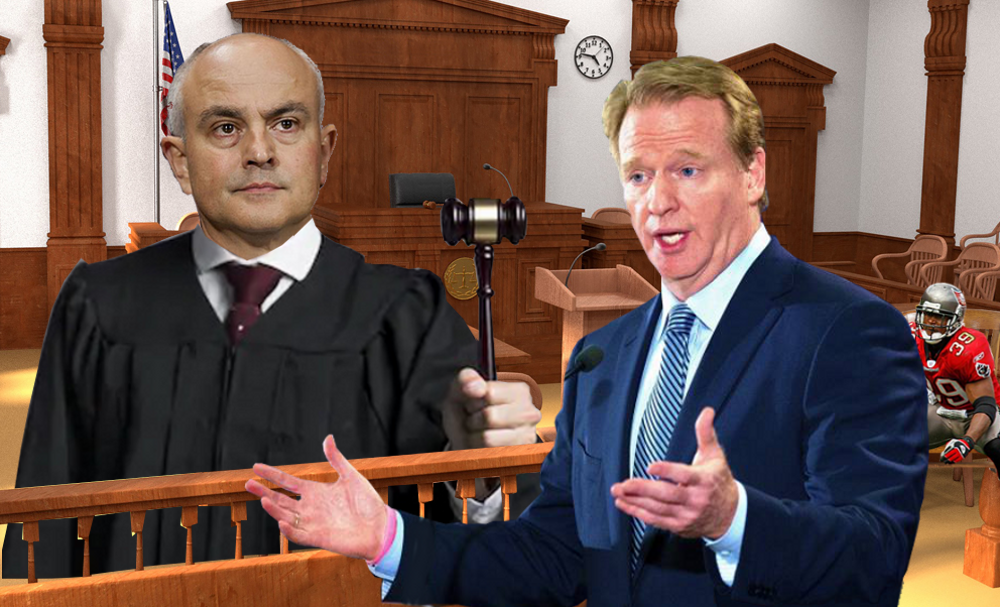 When Judge James Donato of the U.S. District Court for the Northern District of California entered a scathing review of the NFL Disability Plan’s abuse of discretion when he granted summary judgment in favor of Charles Dimry in March 2018. Dimry’s court victory was considered a huge win not only for Dimry but for other retired players whose disability had been denied based solely on Plan doctors retained by the Bert Bell Pete Roselle Benefits Plan.

In a shocking development, Dimry is back in court, again seeking benefits because, according to his complaint, the Plan “strongly disagreed” with Judge Donato.

In his original complaint, Dimry, who played cornerback for the Atlanta Falcons, Denver Broncos, Tampa Bay Buccaneers, Philadelphia Eagles, and San Diego Chargers between 1988 and 2000, presented a laundry list of severe injuries that have left him permanently disabled.

His condition continued to deteriorate and in 2008, Dimry applied for Line of Duty (LOD) benefits which are available to players who sustained substantial disablement as a result of their NFL careers.  LOD benefits are temporary, however, and only payable for a maximum of 90 months.

On June 14, 2011, Dimry submitted his first application for Total and Permanent (T&P) disability benefits and was denied.  He appealed the denial and the plan denied his appeal on May 10, 2012.

The complaint goes on to detail that the Plan holds meetings of the physicians it utilizes for player examinations and that they are instructed to make determinations “in a way that contradicts and contravenes the terms of the Plan by, among other things, ignoring vocational information bearing upon a player’s ability to maintain employment that would exceed $30,000 in annual income, ignoring the opinions and conclusions of treating physicians, and ignoring the impact of pain on a player’s ability to maintain employment.”

The next section explains what happened next, and although the narrative is specific to Mr. Dimry, a convention center could easily be filled with retired players who’ve had the same experience. 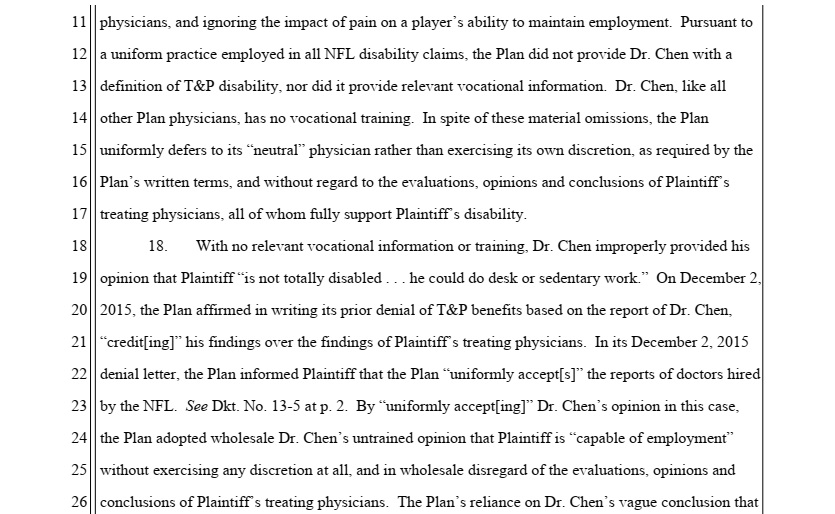 One thing that should be noted is the Plan doctors nearly always find that a player is capable of doing “some type of work” or is “capable of employment” without considering what type of employment the player might be capable of and if there are sufficient jobs in the economy of this nature.

That’s a major distinguishing factor between Social Security Disability and NFL T&P Disability. If a person is only capable of doing a very narrow type of work and typically requires some type of accommodation, SSA looks to see if jobs of this nature exist in sufficient quantities in the economy that the applicant has a viable chance at employment and if his current job skills are transferrable.  The NFL, on the other hand doesn’t care if any jobs exist that might match with a player’s limited abilities.  They simply assume if he hasn’t reached the “potted plant” stage that he ought to be able to do “something.”

Challenges facing disabled people regarding employment are immense.  Most employers would prefer to hire someone who requires no accommodation for impairments or medical considerations than someone who does although discrimination is very hard to prove.

Another problem (and difference) between SSA disability requirements and those of the NFL is that each condition is evaluated separately for the latter as opposed to cumulatively.  Therefore if the Plan should determine based on a player’s orthopedic impairments that he should be able to work a sedentary job, they fail to consider if he has cognitive impairments that would prevent the requirements of most sedentary jobs that require concentration, memory, and other mental strengths.

Prior to congressional hearings that forced the issue, the Plan refused to accept the SSA’s findings of total and permanent disability but later was forced to backtrack to a degree.  Still, it seems a player’s medical records are for all practical purposes tossed in the shredder, and only opinions of the Plan’s hired physicians who are trained to deny players receive consideration.  Often, even in the rare instances when Plan doctors find a player disabled, even their recommendations are discarded as a Board that has no medical training whatsoever continues to insist that the player isn’t disabled.

As Charles Dimry’s struggle to obtain player disability benefits dragged on, he applied for SSA disability and received a favorable determination from the SSA administrative law judge.

In his review of the facts Judge Donato, in his opinion granting summary judgement in favor of Dimry, noted the abundant medical records Dimry had submitted by treating physicians, including Dr. Paul Murphy, who completed a residual functional capacity questionnaire used by the Social Security Administration, and found that Dimry had no capacity for any meaningful work.

He also took note of the fact that Dimry hasn’t worked since 2012 and that he left his last job because he “could no longer stand or lift, couldn’t perform job functions,” and could not concentrate from “exhaustion and ongoing pain.”

After this Dimry filed an internal appeal and asked for records showing the money paid to Dr. Meir and how many of his evaluations had been favorable the Plan and how many to the claimant.  The Plan refused to provide this information and at that stop stopped reporting amounts paid to individual physicians on their Form 5500’s.

Dimry was sent to another plan doctor, James Chen, who found evidence of degenerative disc disease but concluded that he “could do desk or sedentary work.”

The denial letter acknowledged “potentially conflicting medical evidence” in the record but stated that the Board had “credited the findings of the Plan’s neutral physicians over that evidence” because it “generally has more confidence in the reports of its neutral physicians.”  The letter also stated that “neutral evaluations are uniformly accepted and relied upon” by the Board.

Judge Donato notes that while all this was unfolding Dimry had been approved for SSA disability in August 2016 and the administrative law judge determined that he had been disabled since October 2012.  “Based in part on testimony by a vocational expert, the ALJ also found that Dimry’s relevant work experience consisted of being a professional athlete and coach, and that he could not meet the demands of that work or transfer those skills to any other job. The ALJ concluded with the determination that ‘there were no jobs in the national economy that the individual [Dimry] could perform.’”

Donato then begins an evaluation of the facts before him. 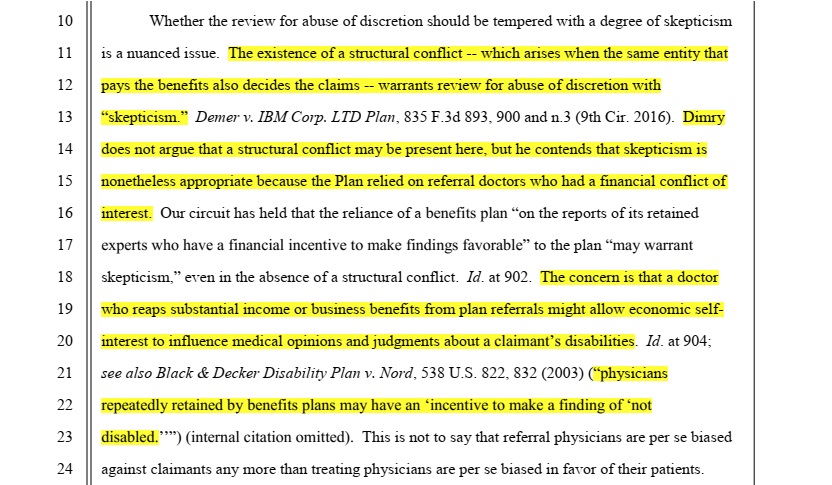 He states that it’s proper to view plan doctors with skepticism and though Dimry didn’t allege a structural conflict, and therefore Donato didn’t analyze that aspect, he still concluded that the Plan doctors seemed predisposed to deny claimants and that the Board bore the responsibility of showing otherwise. 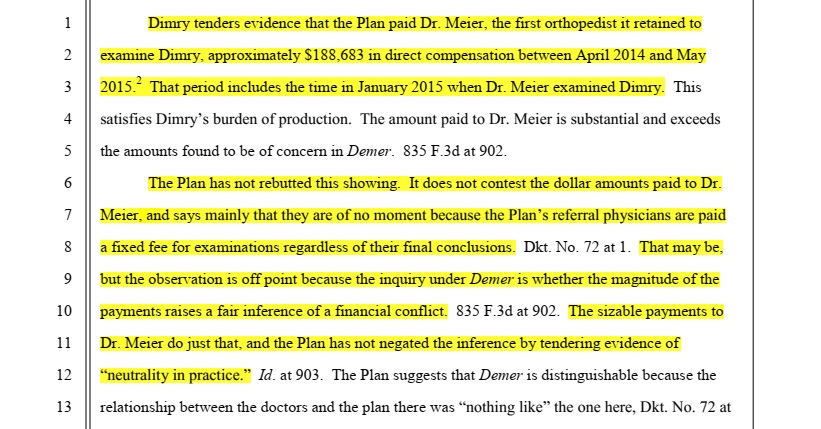 Donato notes that the Plan failed to explain why the controlling case law shouldn’t apply and concluded, “The  conflict analysis turns on the financial incentives to shade reports and conclusions, and not on the nature of the examination.” 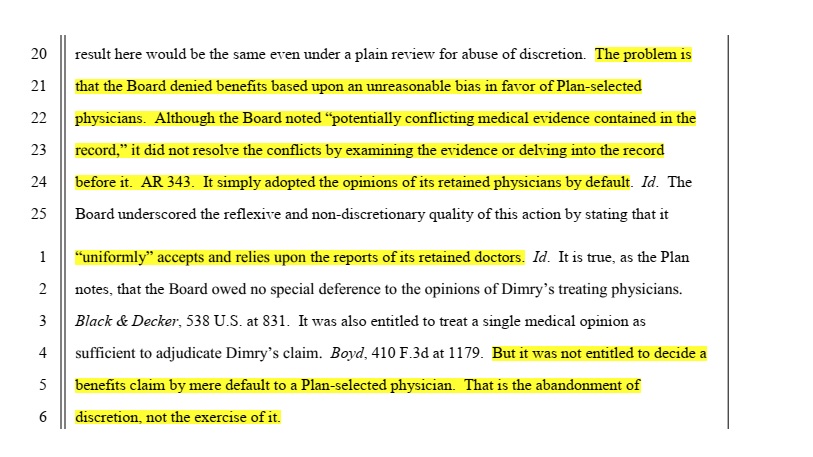 Judged Donato found that “uniform” deference to Plan physicians is an “abandonment of discretion, not the exercise of it.”

Obviously the NFL didn’t like Judge Donato interfering with their decades-old methods to deny disability payment to players and since payments affect the salary cap and salaries of current players, the NFLPA tends to nod in silent agreement, thus these changes that were added to the Plan in 2018. 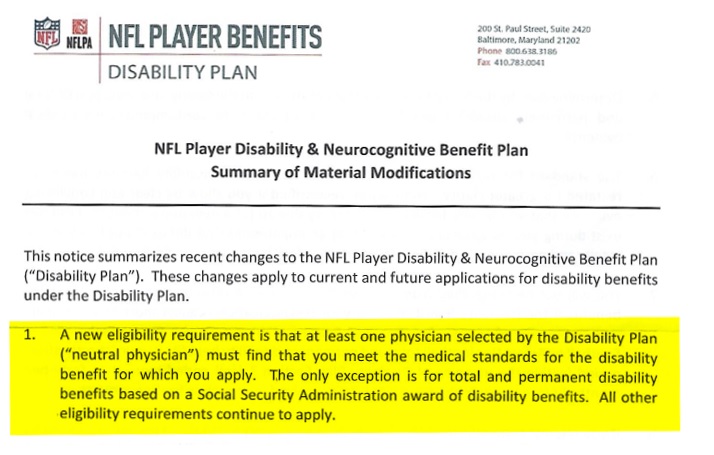 It seems apparent that Judge Donato wanted weight given to Dimry’s personal medical records when he granted summary judgment in favor of Dimry and remanded the case back to the Plan assuming the Plan would nor further abuse their discretion regarding absolute deference to Plan physicians. 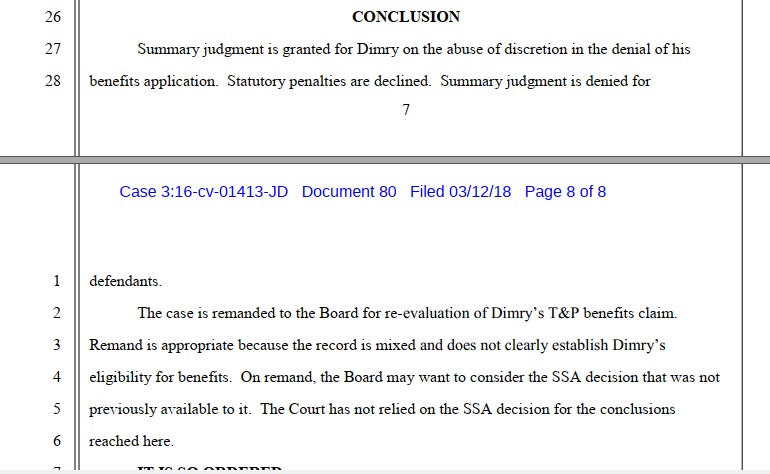 Unfortunately, he was mistaken.  Instead of giving weight to the SSA determination and Dimry’s own medical record, the Plan sent Dimry’s medical records for review by another Plan physician. 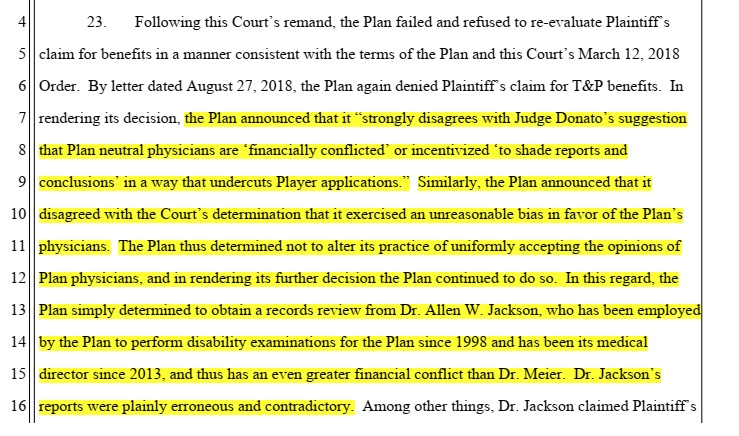 The Plan Physician who has made hundreds of thousands of dollars denying benefits to retired NFL players simply did a review of records without even physically examining Mr. Dimry and concluded that his pain was “unquantifiable” and that he is capable of working.

What appeared to be a tremendous victory in Judge Donato’s decision and recognition of the conflicts of interest inherent with “neutral” Plan physicians and the Plan’s abuse of discretion in deferring only to them appears in jeopardy.

This is an important case to watch in that the Plan seems to have “given the finger” to Judge Donato and the federal courts and stated their intent to do as they please when it comes to determining a player’s disability.  I was surprised to see that Dimry’s current lawsuit is assigned to Magistrate Judge Jacqueline Scott Corley, instead of Judge Donato, who would surely be displeased that his remand instructions were ignored.  It’s unclear if the magistrate judge assignment is temporary, and I’ve attempted to inquire of a few attorneys as to their thoughts but have found it difficult to pin anyone down during the long holiday weekend.  I’ll update later as I receive responses, but I can’t help but feel it may be time for an additional round of congressional hearings.

Prior to the hearings in 2007, the Plan did not recognize SSA disability determinations and was forced to concede in that respect, but in the decade or so, since the hearings were held, the Plan has implemented new rules to make qualification for benefits even more difficult, trying to plug holes from every court loss, and has now partially walked back the deference to SSA disability in that while they’ll generally accept the findings, they refuse to accept the SSA’s disability date determination.  In Dimry’s case, it appears they’ve rejected both the determination of disability date as well as the determination itself.  Unless Congress and/or federal courts intervene, hundreds and perhaps thousands of retired NFL players will find themselves at the mercy of a system that makes grand promises only to evade them when it’s time to take care of the injured.

This will leave retired players fully dependent on SSA disability and Medicare, shifting the burden from damages caused by the NFL to the government and often if a player qualifies for SSI, in addition, the taxpayers of his state.  Players who sacrificed their bodies, and often their brains to establish themselves financially often find themselves living at or below poverty levels while the League laughs its way to the bank.  It’s time for the government to call for accountability, or just simply say, “We’re not going to anger the great NFL because they provide our entertainment.  Neither the players or the taxpayers of our states and country are of any value to us, since above all else, the show must go on.”  It’s time to have that question answered. The public deserves to know.

Permanent link to this article: https://advocacyforfairnessinsports.org/nfl-disability/charles-dimry/nfl-denies-benefits-to-retired-player-because-it-strongly-disagrees-with-federal-judge/