Permanent link to this article: https://advocacyforfairnessinsports.org/nfl-disability/chris-hudson/

The continued failures of the NFL Players Association are most demonstrable in a collective bargaining agreement that heavily favors people who in poetic irony call themselves “owners.” While it’s difficult to perceive all the consequences of every “jot and tittle” of such a contract at the time of negotiation, the egregious flaws from a player perspective aren’t minor oversights that union leadership couldn’t have seen coming which have merely inconvenienced members. 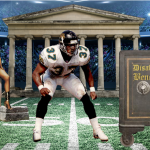 As the expiration of the current collective bargaining agreement between the National Football League and the NFL Players Association hurls ever closer, the suitability of the NFLPA to represent the best interests of the players at large has again been called into question. A lawsuit challenging the PA’s oversight of a disability benefits plan for former players not only demonstrates a failure on the part of the PA but the judiciary as well.