Permanent link to this article: https://advocacyforfairnessinsports.org/nfl-disability/delvin-williams-v-bert-bell-pete-rozelle-nfl-player-benefits/ 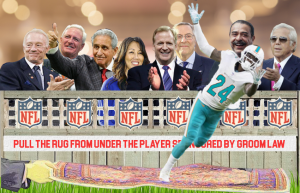 NFL Disability Pulls Rug From Under a Player Disabled Since 1982

The NFL gridiron has often been compared to the gladiatorial displays of Ancient Rome. While the modern gladiators don’t typically fight to the death as their ancient counterparts did, they seldom escape the high-stakes contests without serious injuries.

It’s almost as if a private gladiatorial contest is taking place off the public’s radar—one performed on demand and at the pleasure of the league’s 32 billionaire owners—and with the apparent blessing of the NFLPA. It’s a contest that pits the NFL and NFLPA Plan’s chosen champion, Groom Law Group, against the retired players who return to collect the benefits they bargained for. Delvin Williams is the latest retired player to be forced into the ring.