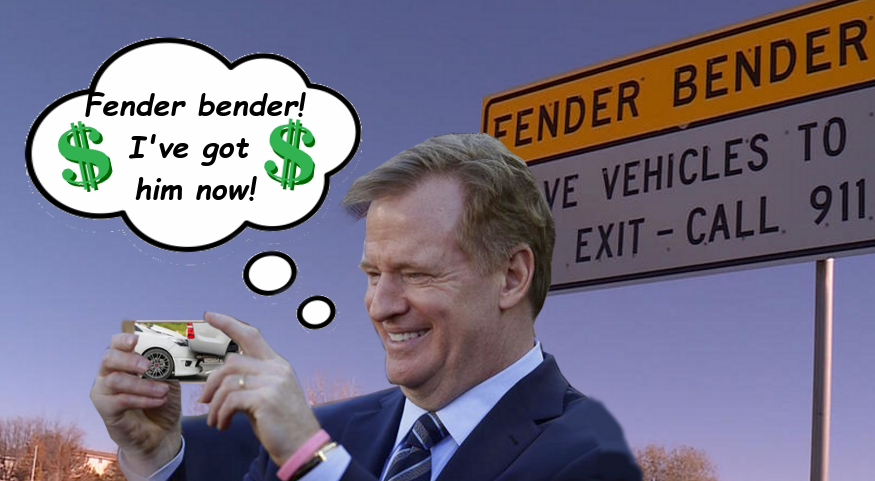 The NFL disability plan is hitting a new low, in the disability case of Tyrone Keys. For decades retired players have fought with the NFL/NFLPA administered Bert Bell/Pete Rozelle Disability Plan.  Things got so bad that congressional hearings were held in 2007 to address the problem.

The tales of tragedy could fill a volume the size of War and Peace, but after a brief state of semi-détente after the congressional hearings, the Plan has continued to stoop lower and lower in its relentless pursuit of denying benefits to injured players. More often than not, retired players must appeal their denials in federal court, and when the Plan loses, it generally updates its rules to keep from losing on the same grounds again.  Take a look at this revision: 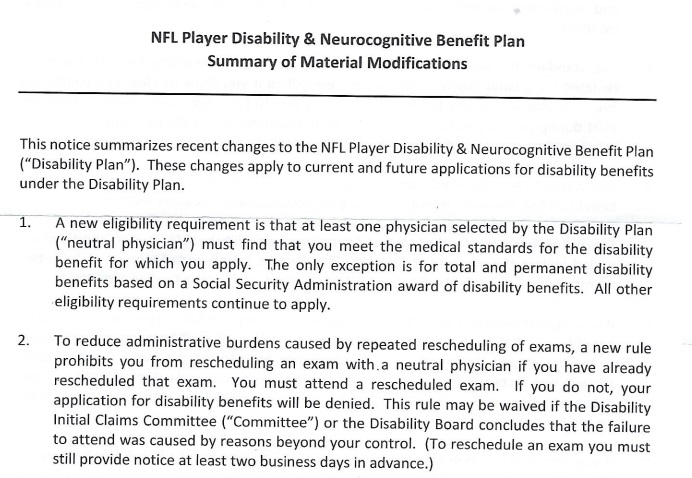 These rules resulted from Darryl Ashmore prevailing in his disability lawsuit.  Despite ample medical evidence supplied by Ashmore, he was denied without as much as a review of the records he submitted because the Plan scheduled him for appointments with plan physicians far from his home.  Ashmore’s orthopedic disabilities make travel next to impossible for him.  He no longer drives, nor can he tolerate air travel.  The first appointments scheduled entailed 1,800 miles of travel and when his doctor sent a letter, requesting a physician in his home state of Florida, they scheduled him with doctors in Atlanta, Georgia, over six hundred sixty miles and almost 10 hours from his home. When his lawyer attempted to get those appointments moved closer, the plan office seemed willing to consider rescheduling until the appointment date passed, at which time they issued a denial because he failed to attend the appointments in Atlanta.  Note that the changes now say that the plan requires a diagnosis from a plan doctor whereas it previously read, “may require.”  The 2017 plan modifications and 2018 plan modifications linked here are almost entirely the results of courtroom losses in which the courts found the Plan had abused its discretion and improperly denied benefits. 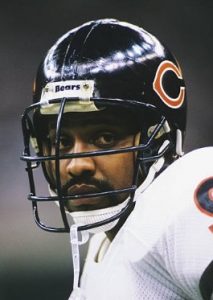 This brings us to Tyrone Keys’ lawsuit which seems to be among the most egregious acts on the part of the disability board to date.

Keys was a defensive lineman in the NFL for seven seasons.  He was part of the storied Chicago Bears team that captured the Lombardi at Super Bowl XX in 1985.  As with many other players from that legendary team who have suffered, or are suffering football’s ill effects, including Dave Duerson, Richard Dent, quarterback Jim McMahon, Keith Van Horne, and others, Tyrone Keys is permanently disabled as a result of his career that ended in 1989, when his final team, the Chargers terminated him because of his inability to play due to injuries.

The lawsuit states that in 1991, Keys submitted a claim for Line of Duty benefits.  He was sent by the Plan to Dr. Hugh Unger, who on December 9, 1991, noted that Keys suffered a herniated lumbar disc and discovered that he’d torn the meniscus of his right knee in his last season with the Chargers. 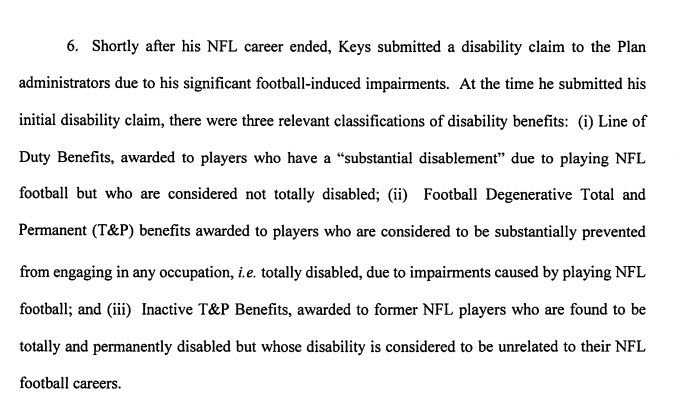 Dr. Unger also found that Keys sustained a cracked glenoid rim of his right shoulder, also attributed to football play.  By this time, Keys had undergone multiple surgeries for his NFL-related injuries.  Dr. Unger’s prognosis was that these injuries were permanent and would continue to degenerate as time progressed. 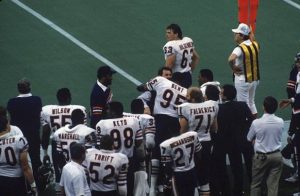 Teammate Richard Dent hugs coach Mike Ditka as Keys and the rest of the defensive unit watch from the sidelines at Super Bowl XX.

In something of a rarity, the Board awarded Keys Line of Duty benefits on his first application as a result of Dr. Unger’s report.  Now, in an extremely callous move, the NFL Plan is seeking to claw those benefits back.

Under the CBA that governed Keys’ Line of Duty benefits, they were set for a maximum period of five years, expiring on December 1, 1997.  He applied to be reclassified and continued as Total and Permanent (T&P) Football Degenerative disability benefits, but the Board denied his request.

On May 7, 2002, Keys was involved in a fender-bender, in which another car struck his bumper while he was sitting at a red light.  Naturally, the impact aggravated his existing injuries but certainly didn’t cause them.

Keys reapplied in September 2003 and was sent to Dr. Harold Selesnick for an examination.  After an extensive physical examination, Dr. Selesnick wrote:

As a result of Dr. Selesnick’s exam, the Disability Board awarded Keys T&P disability benefits effective January 1, 2004, upon further review, Keys was approved for the Football Degenerative benefits about a month later.  The Plan requires continued review of and proof of permanent disability after benefits are awarded and each time Keys was examined there was no question about his condition until April 2011. 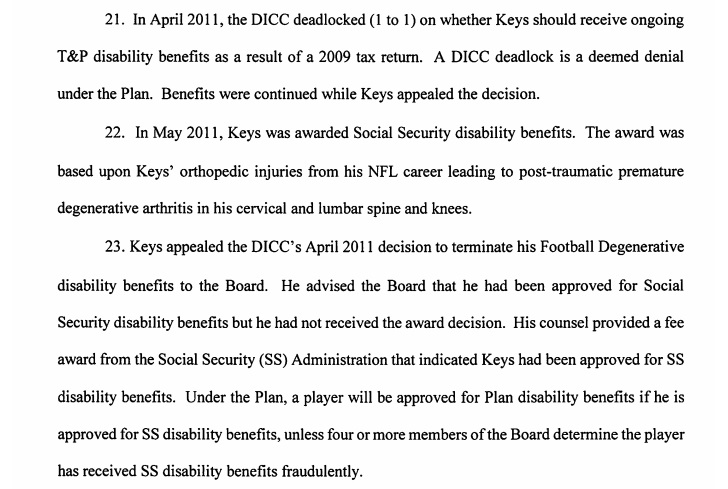 Keys hired an attorney and through counsel pointed out in his appeal that he’d performed limited charity work, and presented tax returns confirming that he was not engaged in full-time employment. He was approved for the lower level of benefits now known as Inactive B T&P, then upgraded to Inactive A, and then downgraded again.  The Plan volleyed back and forth as to the level Keys qualified for until the summer of 2017. 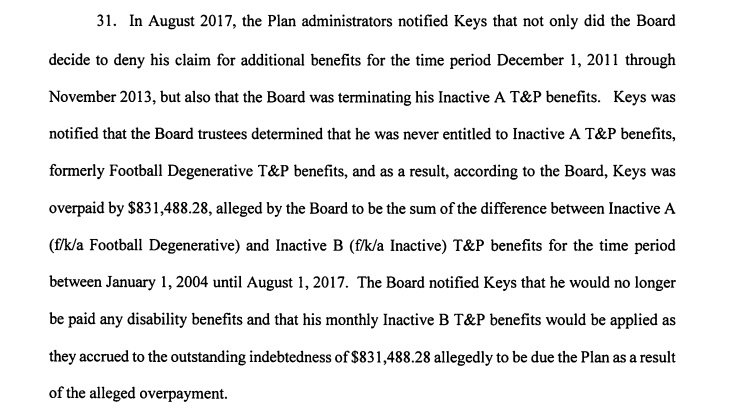 Talk about a blow!  As I’ve seen in other cases in which players sought to upgrade their benefits to a higher level, the Plan has discontinued the benefits altogether, almost as if to say, “take what we decide to give you or get nothing.”  This is the first time I’ve seen them go to the extreme of trying to get the benefits back, however.  “How did the Plan justify this extreme reaction?” you might ask.

They decided that his injuries were incurred during the 2002 car accident in which his bumper was bumped!  They claimed, that he never reported the accident which Keys disputes.  As you recall, Keys retired in 1989 due to injuries and began receiving disability shortly thereafter.  Now the plan claims his injuries were the result of the accident instead of his seven years in the NFL.  He appealed the determination and was denied, forcing him to federal court.

Apparently, the Board doesn’t make a habit of looking at the records supplied by the player’s personal physician, though Keys states his personal physician records clearly document the accident.  Despite the fact that the NFL Plan claims it “discovered” the accident when reviewing Key’s Social Security disability determination, the Social Security Administration granted Keys’ disability and attributed it to his years in the NFL.

It’s hard to see any credibility in this attack by the Plan.  It’s a common insurance and workers’ comp tactic of finding a later injury (or sometimes an older one depending on the situation), and it’s one I’ve experienced myself.  Often the insurers count on the odds of the person accepting the determination without fighting it in court which is exactly what happened to me.  At age 21 I just realized that I’d been wronged but the thought never occurred to me that I should hire an attorney to challenge it.

Fortunately, Tyrone Keys is represented by two very capable attorneys, Lanse Scriven who is local to him in Florida, and Jeffrey Dahl of San Antonio, who is a seasoned ERISA advocate with ample experience in dealing with the Plan.

On page 330 of the NFLPA’s financial report for 2018, $309,910 is shown as having been paid to Groom Law Group, the same firm used by the Plan to battle players in their disability claims, likely spending millions each year to fight against veteran players.  Through Michael Junk of Groom, the Plan has filed a motion to dismiss and a not-so-convincing response to Mr. Keys’ First Amended Complaint.

According to Investopedia, the average Social Security disability payment in 2019 is $1,234 per month, with a maximum of $2,861 but can be less since it is based on average lifetime earnings.

Keys retired from a seven-year career in 1989, before the advent of free agency.  Around that time, salaries of $20,000 to $30,000 were common for players in the NFL, and since Keys was a defensive lineman, his salary was likely on the low end of the scale; based on those earnings, he probably receives about $1,500 per month.  The demand to pay back over $800,000 would take 44 years, and Mr. Keys is 58 years old.  While courts generally don’t demand judgments against disability income, the demand itself seems punitive and designed to punish Keys for daring to ask for the higher benefit level.  While any reasonable person would see how a minor car accident could aggravate injuries that already exist, one would be hard put to blame the damage Keys sustained in his hard-hitting football career to a fender bender.

Often Plan denials are reversed once they reach federal court, but this isn’t always the case.  Hopefully, the court is taking a very close look.

Permanent link to this article: https://advocacyforfairnessinsports.org/nfl-disability/tyrone-keys/nfl-disability-seeks-to-claw-back-benefits-paid-to-a-former-player/