The current model of major college football is morally bankrupt 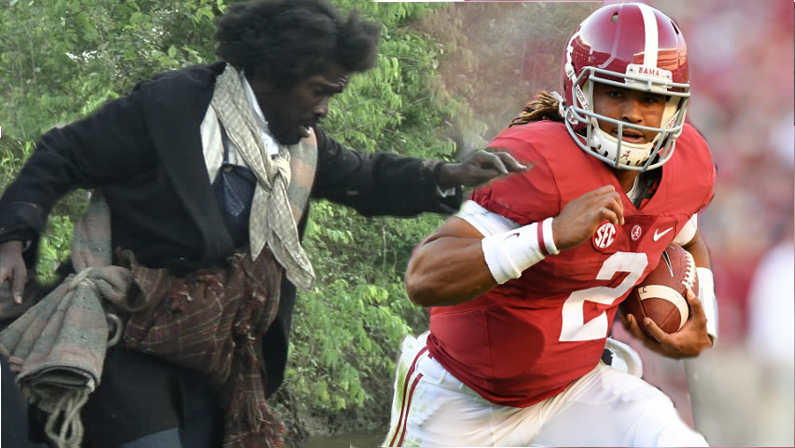 As the Alabama Crimson Tide and the Clemson Tigers decide the FBS national championship at Levi’s Stadium tonight, there’s no getting around the fact that the status quo of the industry they are engaged in is paramount to racism and slavery.

To prove the legitimacy of such a statement it’s necessary to consider the facts of the status quo in high-profile college football and compare it to the image which most people in the United States conjure in their minds when the word slavery is mentioned. That is, the agrarian slave trade of the 17th-19th centuries. Without revealing which of these two situations the facts of which are being laid out, some particulars will be listed:

If it is difficult to decipher whether these individuals were agrarian slaves in the 19th century or modern-day college football players, that should be a sobering thought in and of itself. The locker rooms, practice fields, stadiums and team facilities of high-profile college football programs have become modern-day “plantations.”

The truth which is often not expounded in history classes in public schools is that the 13th amendment to the Constitution of the United States of America did not outlaw slavery. It was the final nail in the coffin of the agrarian slave trade, but that practice had already been outlawed in many states including Virginia prior to the American Civil War.

In reality all the 13th amendment did was modify enslavement that is still protected by law to this day. It could be said that it simply added a step. In order to legally compel a person to provide labor without compensation in the United States of America, all that is necessary is for that individual to be incarcerated. This version of enslavement which is more acceptable to the social conscience is alive and well in the “school to prison pipeline” phenomenon, through which hundreds of young African-American men every year are incarcerated for non-violent crimes to provide free labor. It could be said that for many young African-American men, the options after high school are performing free labor for college athletic programs or providing free labor for companies which contract with for-profit prisons.

The argument for the current model of college football is often that the cost of the books, food, housing and tuition provided for the workers has tremendous value and that is the just compensation for their labor. That argument is deeply flawed.

Assigning value to books and tuition provided by the adjoining institutions of higher learning makes an erroneous assumption. That assumption is that if not for the grant-in-aid provided by the athletic department, that same worker would attend the same institution and pay for those goods and services. That’s an assumption that cannot be made any more than any business could assume that customers who buy items at a certain price would still purchase the identical items at a higher price.

The expense is for the benefit of and at the convenience of the institution and the athletic programs, not the workers. This same model was employed by agrarian slave traders and factory owners because workers who are wholly dependent on their employers for all of life’s basic needs are easier to control. Even if room and board were to be considered legitimate compensation for the workers’ benefit, it still falls extremely short of being equitable compensation in exchange for the tremendous amount of revenue their labor produces.

Despite the economic injustice being done to these young men, this form of servitude is said to be for their benefit. During the period in which the agrarian slave trade was popular, a pseudoscience called phrenology was a popular justification for capturing and holding slaves of African descent. The junk science was used to legitimize Caucasian supremacy. Supplying the “inferior African race” with cause to be productive and not leaving them to their own flawed devices was viewed as a humanitarian effort. Their taskmasters were owed free labor in exchange for their “benevolence.”

In the same way those who espouse the current model of college football love to wax eloquent about how the sport makes “productive citizens” and “responsible men” out of the workers, as if being left to their own devices they would have undoubtedly become degenerate criminals, all the while padding their own bank accounts off the labors of those they are “educating.” The science of phrenology may be defunct but college football is keeping the ideology behind the junk science alive and well.

With all the ways the business of college football dehumanizes the workers involved, why is it so popular? That curiosity can be answered with a scene from the 2012 Quentin Tarantino film, Django Unchained.

The simple answer is that for the masses not involved in the production of the product, it’s highly entertaining, just like for Leonardo DiCaprio’s character in the above scene forcing his slaves to fight was entertaining. The similarities between these two products should not be glossed over. In both cases, men of African descent are physically harming each other for the enrichment and entertainment of Caucasian men.

If that was the sum total of the depravity of this situation, it would be horrendous enough, but sadly it goes further. Not only is this destructive tradition celebrated, but it is subsidized by federal tax dollars. Football players are the most likely to receive Pell grant assistance, despite the fact that their labor brings in more than enough revenue to cover the cost of their “educations.”  And that’s assuming the players receive the education they were promised. Many are cut and fail to leave with a degree, and of those who do graduate, the degree is often in a low-effort major which will lead to a lifetime of low pay.

If analogizing agrarian slaves and college football players seems too extreme, consider that it’s the exact logic the NCAA itself has employed in defending the status quo in court. If prisons don’t have to compensate their laborers according using the 13th Amendment as rationale, then neither should NCAA-member institutions by the same rationale is exactly what the argument has been.

As the confetti flies and trophies are awarded tonight it’s easy to get caught up in the pageantry and narratives that avoid the ugly facts about what’s being put on display. The reality is that what’s really playing out is actually more vile than that scene from Django Unchained. The latter is a fictitious depiction. The former is a harrowing reality.

Permanent link to this article: https://advocacyforfairnessinsports.org/opinion/4442-2-cfb-morally-bankrupt/