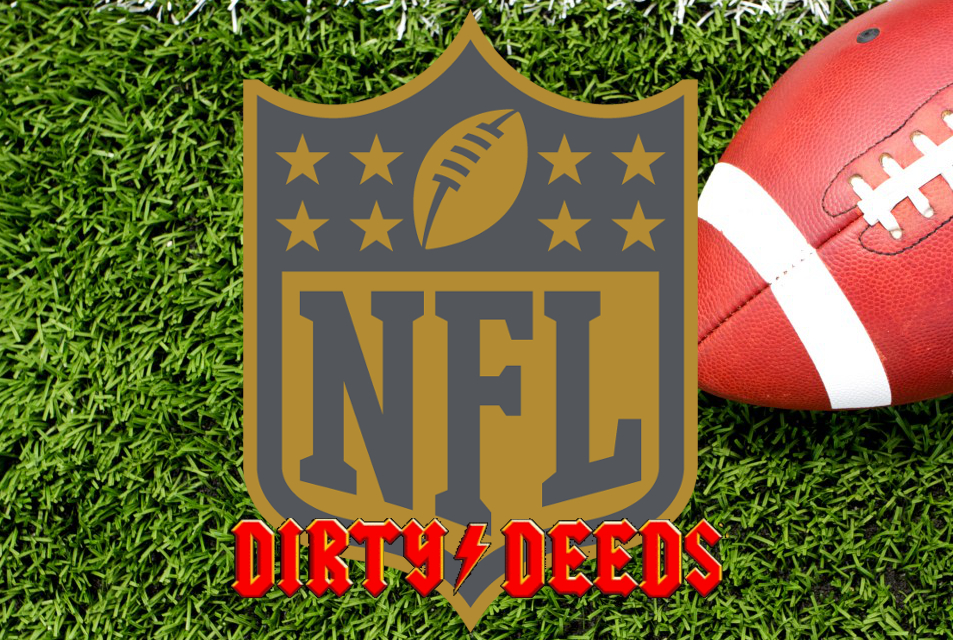 I talk with @DianaMoskovitz about Josh

If you missed Diana’s artice on why a Zero Tolerance policy for Domestic Violence won’t work, be sure to check it out now:

domestic violence will only make it worse https://t.co/KtHGKd0QeC

I want the NFL to

teach players how to talk about DV.

Too Much of the Josh Brown Case Sounds Familiar

discusses the hypocrisy of the NFL on the @PlayersTribune https://t.co/fuC6ezZQUT

“contrition” from Goodell regarding how the NFL handles domestic violence. https://t.co/AVFGNw5JPu

there was only 1 confirmed Josh Brown “event”, it merited a 1-game suspension. But

that’s not what the 6-game rule says. https://t.co/JQKLRHw83m

Can’t help but wonder how this will be handled.

Elsewhere in the NFL:

of-12 PSI report, NFL specifically declined to give the real numbers to @mortreport https://t.co/Kn4JtoChiT

injuries should be a reminder to fans of the risks and realities of playing pro football https://t.co/fhJqltxnKy

.@NFLPA this is a likely reason players are

Offensive Lineman: We Had a Bounty System Just Like the Saints – Breitbart https://t.co/3bDCWVdrHp

To refute the rumor,

I never heard of any bounty program existing within #Vikings locker room. We had

incentives for big plays, not injuries

Las Vegas is finally ready to bet big on the NFL https://t.co/a9KKRDv5Rz

.@NFLPA this is a likely reason players are

Commissioner of the NFL. He is in charge of upholding his own rules that he’s set forth.https://t.co/mErPjWQc0Z via @thecomeback

hiding behind The Shield https://t.co/xEuRdgw9rK

Excellent must read piece by @tomecurran

ratings are sinking like Indiana Jones in quicksand. https://t.co/ljiwvJMBuy Great read via @texashsfootball

The best bettors in

Despite ratings drop, there are “several more arrows left in the NFL’s quiver,” including sports gambling: https://t.co/vJaFc1F6dH

Permanent link to this article: https://advocacyforfairnessinsports.org/2016/10/28/news-blitz-102816-dirty-deeds-issue/

Did the NFL Try to Bully a Domestic-Violence Survivor? via @EdgeofSports @thenation https://t.co/Gp0P5oIipx
This is a must read!

Why did NFL reduce Josh Brown’s suspension from six games to one? https://t.co/vid8cdkvNZ via @MikeFlorioPFT @ProFootballTalk

Elsewhere in the NFL:

Here’s why the NFL better be worried about the sinking ratings, via @nydnraiss https://t.co/PKqjfzzIeS

What concessions might NFLPA receive in return for stadium credits? @BlakeYagman has some good ideas.https://t.co/QKY0fvK7Ai

How NFL Players can Stick it to Football Hitler via @SportsBlog
This really needs to happen.https://t.co/7NFHXHeph7

NFL lives up to nickname ‘No Fun League’ due to recent fines, penalties https://t.co/1SLnhprza3

As @nflcommish tries to woo London, check out this British take on the “beloved” commissioner. https://t.co/utY7ATJoQJ

NFL CBA could be to main reason for ratings drop https://t.co/iucNldOs22 via @fog_sports

Sid Rosenberg: Roger Goodell, NFL need to get their act together now https://t.co/zFwwDxrbb5 via @Metro_US

The NFL wants to police the n-word. Yet another curious venture into murky territory. https://t.co/hDBRrmbLwt

Roger Goodell: NFL fans too dumb to get why Josh Brown fiasco not my fault https://t.co/cJEgpUl5F8 via @nypostsports

NFL Players Lost Millions in Failed Alabama Casino, But as Investors, Not Gamblers https://t.co/piEhiw359A via @Casino_Org

OBJ is appealing his $24K fine against the NFL for his unsportsmanlike conduct call. #SportsLaw https://t.co/mvMUH10pY7

The reaction to the Derrick Rose verdict was a gross celebration of a system that continues to fail accusers. https://t.co/OP3APGjN48

On @SInow: the next NBA CBA won’t have radical changes, but small changes can have big impacts + the timing may be right for NBA expansion: https://t.co/ftFdBNhT9m

@WALLACHLEGAL @KenDavidoff let’s solve it now…or at least in the next couple days. No one gave a $hit until Cleveland got back into the WS

Miami police: Body of Marlins pitcher who died in a boat crash had ‘strong odor’ of alcohol https://t.co/BB0aN5FTRI pic.twitter.com/6JXeLZVR4b

Insufficient evidence to bring sexual assault charges yet a restraining order keeps the players away from stadium https://t.co/4jjy1tilNb

Hiring a college football coach is expensive. Firing one is too. https://t.co/XiJLuYqibd via @usatoday

#DraftKings and #FanDuel settle with New York for $12 million-short read to bring you up to speed. https://t.co/PlACC0RLsr via @jonfingas

The NFL has a ratings problem. Legalized sports betting could fix that if viewership remains down. https://t.co/gLWxbtgDqD pic.twitter.com/SGtbxihy2K

Here’s a very sobering read on how traumatic brain injuries can cause substantial harm to today’s youth. #SportsLaw https://t.co/acWWRjUKP6

Colin Kaepernick’s National Anthem Protest and Frederick Douglass’s ‘What to the Slave is the 4th of July?’ https://t.co/J33Tnl9ubN

Enough is enough — it’s time for a new NFL commissioner https://t.co/Mjv0PuW1E3 via @Stanford_Daily

Excerpt from the article posted above:

One of my favorite writers, Michael Hurley details that everything from handling of DV discipline to fining William Gay for wearing DV awareness cleats theres “a despicable culture on display in the NFL,” and finaly calls for the commissioner’s job.

Sally Jenkins spares no words for Roger Goodell in the article below:

“Roger Goodell has tainted the entire league as uncaring and hypocritical.” https://t.co/B26qwdWU2a Straight talk via @sallyjenx

NY Giants release Josh Brown, but it this too little too late?

If Giants withheld Josh Brown information from the NFL, they deserve punishment at least as severe as the Pats https://t.co/RtQ9YfwXV7

The Giants have released Josh Brown. Here’s @AndrewBrandt on the league and team failures that got us here: https://t.co/CcwAaUo2Vk

In statement, Giants prez John Mara says: “Our beliefs, our judgments and our decisions were misguided. We accept that responsibility.” pic.twitter.com/JCfmtWrF0p

Former #Giants kicker Josh Brown has released a statement, via the team. It is different from the one released to ESPN: pic.twitter.com/bfwl2azx1t

On the other hand, the NFL has suspended players for DV after they were cut. See ex-Lion Rodney Austin (6 games): https://t.co/nOBcNwWrVW https://t.co/3sNmPzQUrP

And if you’re wondering how Josh Brown’s salary will work out, you’ve got that info here as well. https://t.co/qdoWN1LLyG

Giants cut Josh Brown because of domestic violence. But what of Giants, who didn’t care until public was outraged https://t.co/JDBgpMuM0T

Irony of NFL’s lax punishment in Rice and Brown cases is that it ultimately led to the most severe punishment: loss of their careers.

Diana Moskovitz explains why there really are no easy solutions to domestic violence:

Zero tolerance for domestic violence will only make it worse https://t.co/KtHGKd0QeC

Note: Diana will be the featured guest on the Conduct Detrimental podcast with Daniel Wallach and Dan Werly later this week, and this will be discussed in depth.  Check it out on i-tunes or The White Bronco

Jane Doe now has until November 21st to appeal the verdict.

The next step for Colin Kaepernick:

Kaepernick answers what’s next: Inclusion and access to the halls of power in sports https://t.co/ffK7niF282 via @TheUndefeated

Athletes protest gestures aren’t new
Why do we complain when they embrace a cause & take a knee instead of a selfie?https://t.co/1MfXCt6xNe

Will The NFL Change Its Tune On Sports Betting If Ratings Decline Persists? https://t.co/GvH3IbtJ5g pic.twitter.com/Aey1Zrb9fE

I do hate throwing out merger talk, but clearing this case from the docket would make sense if a real possibility. https://t.co/lcsW2Tf4no

What’s missing from #DFS settlement agreement: a finding that companies misrepresented that their games are not considered “gambling”

NYAG Finding: Cos. “misled consumers about substantial advantages high-volume and pro players had over other players” pic.twitter.com/qW5j7bPVah

Really love this piece from @TheWilderThings about NFL players shying away from talking politics. https://t.co/VEdcMH8Wyu

The issues w @NFLPA financial advisors are mitigated (not solved) if more schools helped their students navigate the process of going pro. https://t.co/SE9As21Sd5

Chase Carlson is really on top of this – see his Twitter feed for addtional insights:

.@ChaseACarlson‘s feed right now is convincing me that the NFLPA financial advisor program is, in itself, a scam pic.twitter.com/VNRrux4pA7

Insightful perspectives on O’Bannon and beyond https://t.co/P31xZzg1gF

Today is the first day of advocacyforfairnessinsports.org.  Got my old articles from defendersofthewall.com moved over and hope to have some brand new content out very soon.  Thank you for your support!

Permanent link to this article: https://advocacyforfairnessinsports.org/2016/10/25/first/