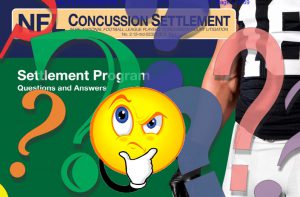 On December 1, a proposed document of Frequently Asked Questions (FAQ) was posted via Electronic Court Filing (ECF) to the NFL Concussion Settlement docket.  The purpose of the FAQ document is to aid the neurologically impaired football players who are class members to the settlement in understanding its terms and filing their claims.  During the enrollment period for the settlement, when retired NFL players had to make a choice between enrollment in the settlement, opting out, or ignoring it all together, in order to encourage enrollment Co-Lead Class Counsel Christopher Seeger, along with Claims Administrator Brown Greer portrayed the enrollment and claims processes as “simple.”  They encouraged retirees to not hire independent counsel for this reason.  They were told if they had a qualifying diagnosis their claims would be approved, and a 30-60 day window was referenced as an estimated approval time.  As a result, approximately 20,000 retired players or their representatives registered for the program, including many who had previously objected or opted out.