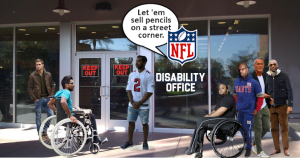 On Monday a new federal class-action lawsuit was filed in the Northern District of Illinois, that seeks to recover benefits lost by disabled retired NFL players in the 2020 CBA.

To review, in a series of questionable moves, benefits for disabled retirees were deemed subject to a Social Security offset beginning in January 2021, and then in April 2024, the elimination of approval through Social Security determinations to be replaced solely on determinations by Disability Plan doctors and the Disability Board.  In case you’re just now getting up to speed on these events, prior to Congressional Hearings in 2007 addressing the dismal approval rate for NFL Total and Permanent Disability and pressure from Congress, to do better, one had nearly as much of a chance of winning the lottery as being approved for NFL Disability.

END_OF_DOCUMENT_TOKEN_TO_BE_REPLACED

Permanent link to this article: https://advocacyforfairnessinsports.org/2020/10/26/nfl-concussion-appeal-argues-one-door-for-white-players-another-for-blacks/

END_OF_DOCUMENT_TOKEN_TO_BE_REPLACED

Permanent link to this article: https://advocacyforfairnessinsports.org/2019/08/25/psychology-sociology-and-law-intersect-in-amon-gordons-nfl-concussion-appeal/

On Tuesday, in response to a show cause order asking why the Third Circuit should accept a concussion settlement claim appeal, Wendy Fleishman of Lieff Cabraser filed two briefs supporting her client Amon Gordon and opposition responses were filed by the NFL and Lead Class Counsel Christopher Seeger. As you might expect the briefs were a bit on the dry side since purely legal issues were addressed as opposed to delving into the merits of the case, and I’ll recap the legalese in a bit, but first, I’ll look at an issue that’s anything but “dry.”

END_OF_DOCUMENT_TOKEN_TO_BE_REPLACED

Permanent link to this article: https://advocacyforfairnessinsports.org/nfl-concussion-settlement/psychology-sociology-and-law-converge-in-amon-gordons-nfl-concussion-appeal-to-the-third-circuit/